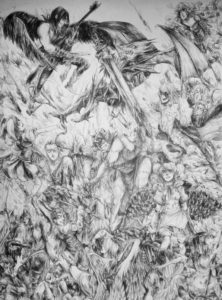 Neither Heaven nor Earth had seen a bloodier battle than that on the morn’ of the Eclipse. Infused with all his restored glory, the fallen angel Gnitemastre had waged a war not unlike the first centuries ago, when he and his Band of Rebels first dared to covet the Power of rhe Sun. This battle was not unlike that one of old, nay, but for the aid of Brazzlekrug, Righteous Paladin of the Sun’s Light, and his patchwork Army of the Undead. The waning rays of the infant sun glistened off the Half-Dragon’s Blood Vengeance Armor as he dangled aloft before the Rebel Angel. Beneath this airborne clash of faiths feathers were scattered to the Heavenly wind by Nightshade, the now-holy Necromancer, and her brave Undead. Dash Dogmonster, meanwhile, unleashed a Doglike flurry of Monstrous Assaults on the rebel forces. The angel Krhzthanthyn- his flaming sword at his side- felt the blood of his traitorous brothers and sisters wash over him, dying his wings a deeper red as they Fell. One stood calm amidst the chaos: the newly deified Nosterafu, gracious Goddess of Meat and Mystery, her freshly-baked wings dripping blood-red hot-sauce onto the offending corpses. Not a rebellious soul was spared this morn’ by this new Alliance of Sun and Moon who vowed destruction for all those under Gnitemastre’s command. The battle would rage until every scrap of angel had been swept away in the winds of time and by the sullen broom of poor, dead Frederic. But never, evermore would that broom wipe the memory of this glorious battle from the minds of all who dwell on this fair earth, under the Incandescent Light of our Beloved Sun.