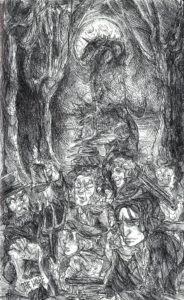 “Amongst the perilous mists formed of the moon arising new / The creature set upon us like a plague / Waist deep we proceeded to be butchered in the fog /
Strafing straight into the clutches of the beast that hell hath spawned / One by one did they scream, dragged beneath the blanket of the mist / The mob is damned, born to lose / a sacrifice of human meat to lycanthropic bliss / The wolf simply can’t resist…”
– The Black Dahlia Murder, ‘The Fog’